.
July 2016 In the beginning.​
Work has begun on this once in a lifetime project. The first step will be to make as many notes and drawing of elements of the car before work starts to take it apart to make repairs. Barney and Smith did not keep great records and these notes will be useful to correctly rebuild the interior in the future and assist others with classic wood cars like this. Hundreds of photos are being taken and some will be posted on these pages to give an idea of the work we are accomplishing.
​
The major concern is getting the roof covered to keep the weather out. Tarps will be purchased to accomplish this. I am not going to cover the car in one large tarp but a few smaller ones that will have the edges overlap. This will allow small parts of the roof to be exposed to do work keeping the rest of the car covered. 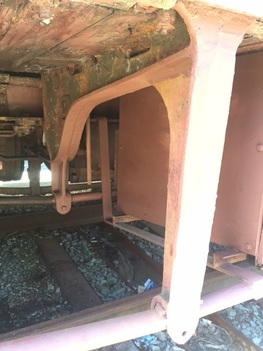 August 14 Work Update
I decided to go tackle the roof today. I took a section out right above the post between the windows at a place where the roof looked fairly stable. The wood is rotting away quietly badly but there is enough there to make templates as a start to rebuilding. What I found on top of the wood in the roof was a layer of paper, three layers of canvass roof. The bottom layer had a brownish paint on it. The middle layer is painted black and the top layer is painted silver. There are also 2 more layers of modern roofing on top.
There is a heavy metal beam holding up the roof above every window post. The side walls of the car are very stable so there is no chance of this falling in. The wood parts are attached to the metal at these points and built out from there. The metal piece is 3/4" wide and 2" deep and formed to the roof lines.
Between the upper and lower roof is a copper drip strip. This is about 4" wide, extending over the lower roof and 4" high under the siding between the upper and lower roof.
I know this looks really rough but the important part is that fact that it is all there and can be copied. I am making templates and drawings of what I find and while share with everyone when I finish getting all the info.
Photos from the inside and outside showing the lower clerestory framing and a very old power cable.
August 21 Work Update
This might be the most boring update ever. This one is all about paint.
The car was in passenger service from 1910 till 1940 when it was assigned to be a work service car.
There is a distinct difference in the type of the paint used at the different times.
On the outside of the car I found from bottom layer top layer are:
1. Pullman Green
2. Work Service Red (Probably GN work colour.)
3. A brown Colour. ( This could be the BN work colour.)
4. The green the WCRA painted the car in 1995.

On the inside there are two areas to consider, the painted ceiling and the veneer walls and wood trim.
On the painted ceiling the colours I found from bottom layer to top layer are:
1. A light tan Brown (This could be the builders colour.)
2. A light green (This could be the colour the panels were painted after the 1924 rebuild.)
​3. A Tan Brown (This must be the first work service colour as the whole interior is painted this colour.)
4. A locomotive cab green.
5 A very light robins egg blue.
Covering the Mahogany on the walls and trim there are only the colours #3,4 and 5.
September 3 Work Update
​I took a big step toward winterizing the car today. I bought 3 tarps and a bunch of rope and got two of the tarps on and tied down before the wind came up and foiled my plans. I will get the third one up in the next few days.
I have also been doing more painting and scraping.
Now that winter is coming and the days I can work outside are getting fewer, I can concentrate on making drawings from all the notes I have been taking over the summer. 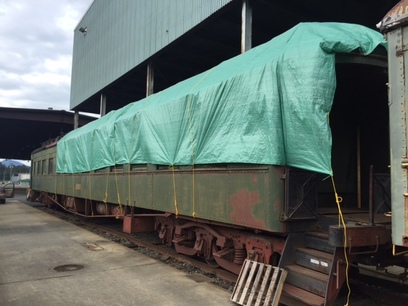 September 4 Work Update
I have put enough notes together to start building one of the structural parts of the car. I have started to build the ribs or car lines that hold up the lower clerestory roof. I started by making a paper pattern from measurements and traced this pattern onto a piece of 1/8 plywood to be the master pattern. I put this pattern in place in a few areas on the car and had to make a few minor alterations to make it fit properly. I then used this pattern to lay out the final pattern on a piece of 2X10. The final piece was cut out on the band saw and drilled to accept the bolts where needed. One big assumption I have is the slot for the nut on the top part of the piece. There is not enough of an original to figure out how the slot was made. What I did was drill a hole and squared it out with a chisel. I am only assuming but it works for what I need it to do. If anyone has had any experience with this type of construction I would appreciate any ideas you might have. Only 140 more to make.
Here are some photos of the patterns and finished piece. There is also a photo of the plywood pattern in place.
The right photo above shows the lower bolt that goes through to the wall of the car. The other photo shows the bolt that goes into the header between the upper and lower Clerestory ceilings.
September 5 General Info Update
I hit the books a little today as the weather is getting colder and showery.
The 1912 Car Builders Cyclopedia sheds some light on the castings used during the 1924 rebuild. Commonwealth Steel Castings provided the end pieces and the Queen post castings and other small parts. The owner had to provide the steel I beam that went between the end castings. On the 1090 there are two I beams beside each other. The end castings could be supplied with or without vertical end walls with crash posts. The 1090 has just the flat frame section with no vertical wall.
In the above diagram from the 1912 Cyclopedia the castings on the right are the ones that are on the 1090 as can be seen when matched with the photo. These castings are bolted to the wood frame of the car and to the centre steel I beams. The holes are not just cast in the pieces just to look good and reduce weight, brake rods and piping go through some of the holes.
The above two diagrams show the cast steel end casting as applied to the 1090. Some cars had end castings with a large fish belly girder frame with no truss rods. The 1090 has straight steel I beams between the end castings. The castings applied to the 1090 have attachments to hold the truss rods which were retained in the rebuild and in my opinion keep the cars good looks.
September 11 Work Update 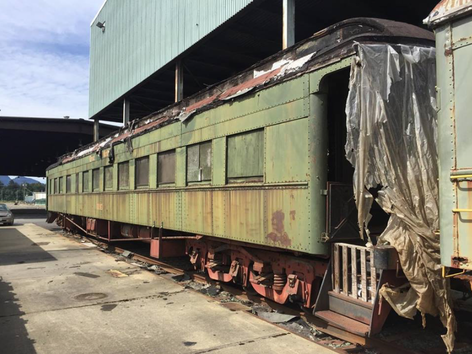 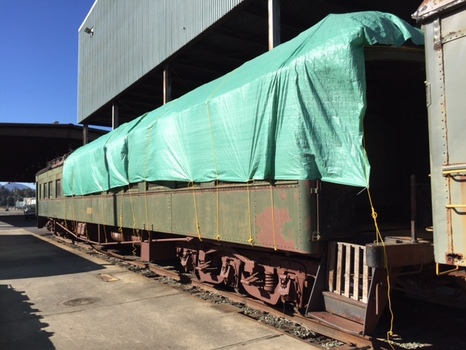 Sept 13 My Inspiration
When I was growing up my dad, Bert Mills, modelled Great Northern in HO. His main yard was Interlay in Seattle and he had two other smaller yards to go to to make it a great operating layout. In his passenger pool he ran the Empire Builder and the International in both heavyweight and postwar streamlined cars. On the rear of his heavyweight trainset was the cafe-Lounge car 1056 made by Silversides in the 1950s. As a kid I always dreamed of being able to ride one of these majestic cars and now I am restoring a real one. I might not be able to go far with my car but I am going to have fun with the challenge of restoring it and fulfill a lifelong dream of sitting in the lounge of this great car when it is done. 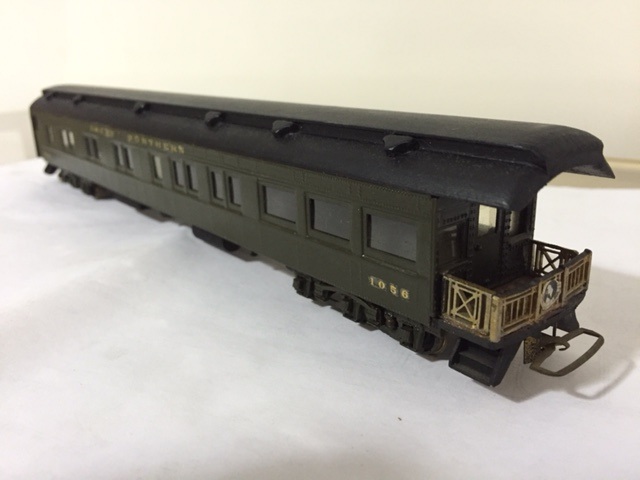 Sept 18 Work Update
When you start working on a project like this you get bombarded with ideas from others who have worked on projects of various sizes. One of the big challenges on any project that has steel in it is dealing with the rust. The first and easiest method is to chip the large bits off, wire wheel, prime, paint and take your chances you got it all. This is the easiest and least expensive method. The next one is sand blasting. For this I will need several thousands of pounds of sand, a sand blasting machine and the positive pressure suit so you do not breath in any of the dust. This could get very expensive for a car with the surface area mine has. Another method, and the one I think I will be using, is to needle gun to bare metal and apply a product called Corroseal. www.corroseal.com This is a product that you apply after cleaning the surface and it chemically treats any rust that might be left in holes or cracks. It also acts as a primer. I was discussing the rust issue with the team working on the CP 8000 and it reminded me that the team that are working on the BC Electric 960 have been using this method and it is working very well.
Sept 30 Update
Sometimes you look at your project and it seems a bit overwhelming. At this point I was on Facebook and saw what the "Dirty Hands Club" at the Bytown Railway Society were doing with CN coach 4977 and it brought things back into perspective. Here is a list of cars that their restorations are either ongoing or completed for a little Motivation.
www.trevors-trains.weebly.com