.
At the heart of the great depression Henry Bowen was appointed by the Canadian Pacific to be their Chief Mechanical Officer after moving up through various other positions. During his tenure 462 locomotive designs and rebuilds were outshopped. One of these was the mighty H1e class Royal Hudson.
The initial design for the CPR H1 Hudson came off the design office desk in 1928 and was a non streamlined locomotive. The 2800 left Montreal Locomotive Works in 1929 and proved to be a superior locomotive design. The rival CN were building a fast passenger locomotive but had to settle with a 4-8-4 design due to the light rail on the old GTP lines and needed the lower axel loading to run the heavier locomotives. This did not apply to the CPR and the shorter wheel base hudson proved their worth having an initial tractive effort of 45000 lbs and later locomotives in the class had a booster engine applied to the rear axel of the trailing truck which added a further 12500 lbs of tractive effort for starting long trains.
From 1929 to 1939 the design of the Hudson evolved and streamlining was added starting with the 2822 and many other refinements were introduced.
In June 1940 the final class of Hudson was introduced, the H1e class, which was the epitome of steam locomotive construction in Canada. The H1e class were the first hudson build as oil burners and were assigned to the west coast to operate between Vancouver and Revelstoke.
In this service the Royal Hudson locomotives would run 7000 to 10000 miles a month pulling the passenger trains of the day.

The Royal Hudson was retired in 1956 and put on the scrap line in Winnipeg.

In Vancouver a group of rail fans were getting together to try and save a locomotive to go on display somewhere in the city.
This group was called the Vancouver Railway Museum Society. They went searching for a locomotive and found the 2860 to be the most complete locomotive in the scrap line and asked the CPR if they would move it back to Vancouver. It was repainted and displayed on track near the Bayshore Hotel.
The locomotive was sold to Joe Hussey who was working toward starting a tourist train which the 2860 would pull.
Here is an article found by my friend Pat Hind from the newspapers of the day. 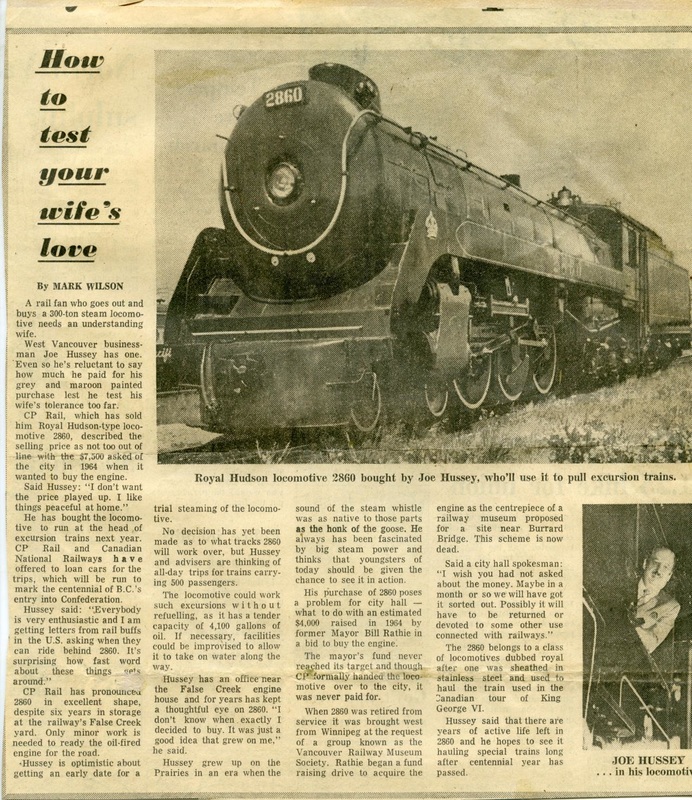 With the change of government in British Columbia in September 1972 from the long ruling Liberals to the NDP, there came a change in the attitude toward the railway. Premier Dave Barrett was now in favour of starting a tourist train as Joe Hussey wanted to do years before and had the power as premier to make it happen. Joe was paid $25000 for the locomotive and some retired passenger coaches were rounded up from eastern Canada and the first run happened in June of 1974. 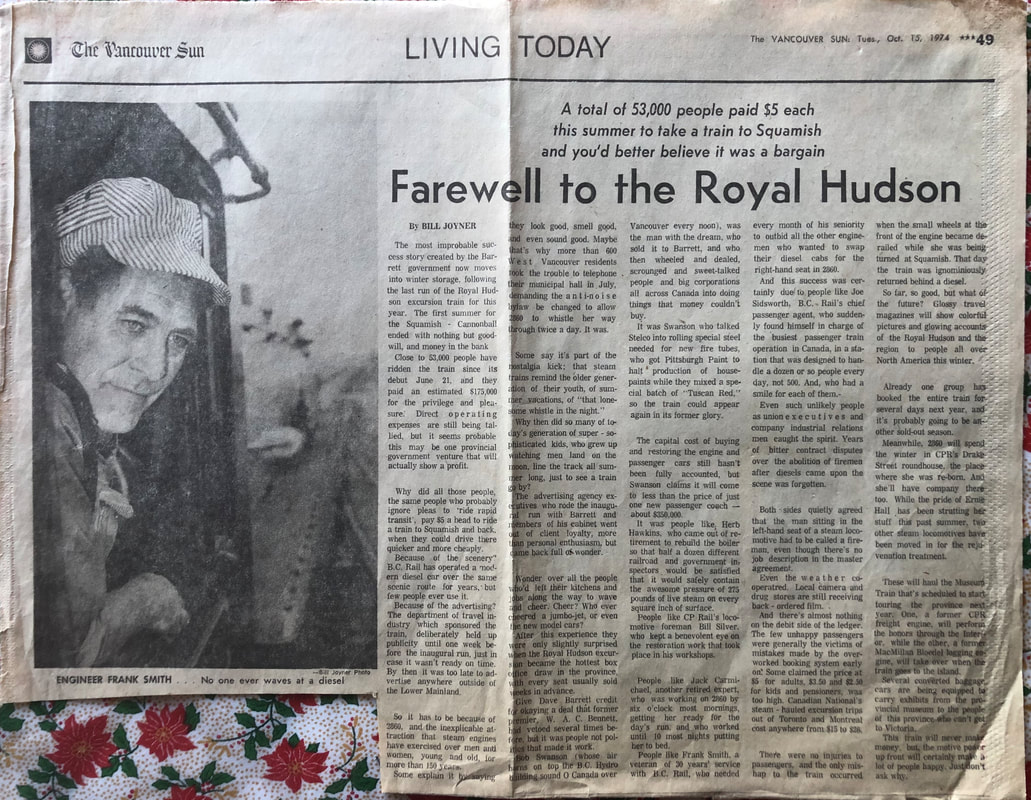